It may seem silly to be placing bets on an event that you have no say in what the outcome may be. Placing bets on your favourite sports is a game based entirely on how well you have studied your team and then some luck. Even though some of these betting amounts may seem rather ridiculous to some people, if you are correct in your bet you stand the chance to win more than just a pretty penny.

From highest bets ever placed on sporting events, here are some of the worlds biggest sports bets that have ever been placed. Admiration for the confidence of the people that placed these bets is definitely in order. As the old saying goes “To win big, you have to play big” and this is most certainly the case here.

In 2010, professional poker player, Billy Walters, decided that it is time to bet on something other than his regular poker game. It was time for the Super Bowl and the New Orleans Saints were going to play against the Indianapolis Colts. According to all of the sources and the people that were apparently in the know how, the Saints were the underdogs and stood very little chance in winning the game.

Walters decided that he was going to do his research and looked at it from every possible angle. All the evidence that he found actually favoured the Saints for the win. He decided to take the calculated risk based on the odds that he saw and placed a bet of $3.5million on the Saints. As luck or calculation would have it, the Saints won their first ever Super Bowl on that day, against the Colts, with a score of 31-17. No one really knows exactly how much Billy took away from that in winnings, but it could not have been chum change. 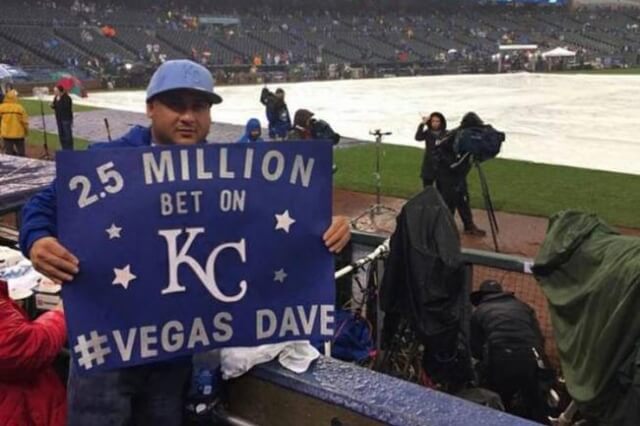 It was MLB Baseball League season in 2015 and Dave Oancea, or Vegas Dave – as he is called – decided to place a bet that was not just ridiculous in size but also in pay out. The Kansas City Royals were set to play against the New York Mets and the odds were not in their favour with 30/1. Dave however decided to place a bet of $140 000 on the Royals.

His bet had to be split up between casinos as no single casino wanted to take on his full bet, considering the odds were stacked against him. Some even told him that he was crazy.  15 different casinos divided his bet and it payed off. The Royals won the game against all of the odds and gave Dave a total winning of $2.5million.

The 2019 the golf championship was one to watch. Tiger Woods had not had a win in 11 years and the odds were against him. Even though no one wanted to bet on Tiger, James Aducci placed a whopping $85 000 bet in him. It was a great move and for the first time in 11 years, Tiger was in top form, bringing Aducci a $1.2million win.